After two weeks away and finally catching up on work stuff, I paid John a visit to see what’s good in the garden.

When I arrived, John was in the watermelon patch trying to untangle a soaking hose. I helped him out a bit and we transferred the hose to a different part of the patch. In the process I spied at least eight good-sized watermelons on their way to emodying summertime goodness.

Because the garden changed so much in my absence, John took me on a tour. I snapped some photos with my iPhone to share. First we stopped at the blue bird house. The baby birds flew the coop! But a new family moved in to the house across from the corn stalks. John, ever the attentive landlord, gave them a new roof to keep out the rain. 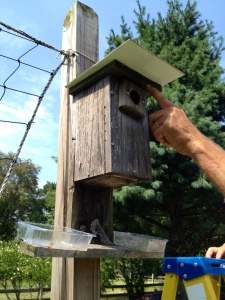 From there we checked in on the strawberry patch. The new plants are producing a tangle of runners, and we even found a few tiny berries to share.

The pumpkin patch is thriving. Two huge pumpkins made an early appearance. 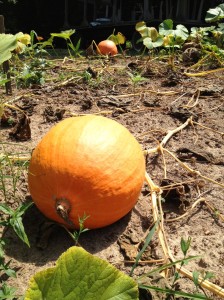 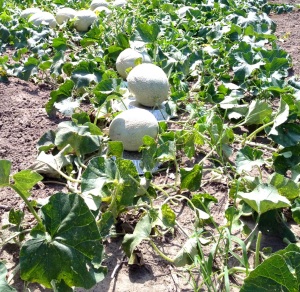 Next we turned our attention to the potato rows.  John got to work with his shovel while I helped loosen the dirt with a pitchfork. White potatoes appeared as if by magic on top of the upturned soil.

Dried up potato plant means potatoes are ready for harvest 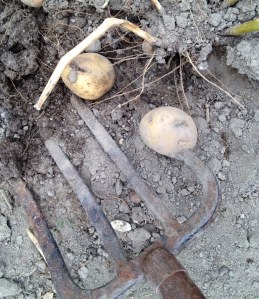 I speared a potato with my fork 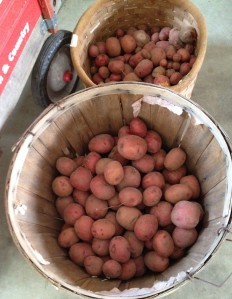 Red potatoes, harvested and looking rustic in their baskets

After pulling a few weeds (including poison ivy) from around the blueberry bushes, I checked in on the corn stalks. John and I picked a few ears for my supper.

I’d been looking forward to seeing the tomato plants in full swing since John and I planted them. They are flourishing! Bag in hand, I jumped into the tall plants to find a few. John told me to look low as tomatoes ripen on the bottom first. We found some beauties! 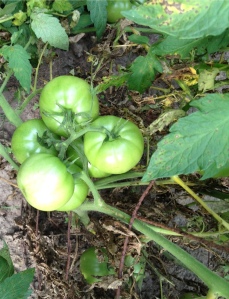 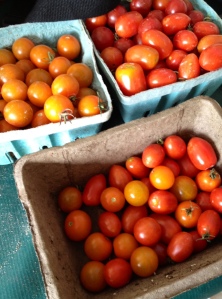 John picked these cherry tomatoes for me ahead of time. My favorites!

As usual John sent me home with a bounty of vegetables; I had to make three trips to the car! 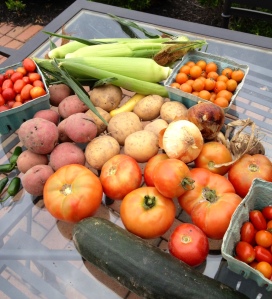 I promised to be by next week to help water the garden and admired Kathy’s flowers on my way out.

Apparently, at John’s house, EVERYTHING’S good in the garden this summer. 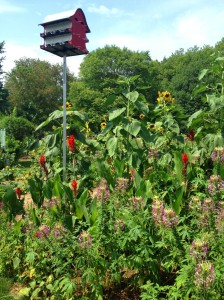