In my excitement about picking up my very first Lancaster Farm Fresh Cooperative winter CSA box, I uttered that phrase all day on Tuesday of last week. Who can blame me? A box of organic, locally grown root vegetables, carrots, sweet potatoes and the most beautiful stalk of brussels sprouts I’ve ever seen awaited me at my pick up spot – Home Grown Cafe.

I don’t even think nerds get this excited about Star Wars. 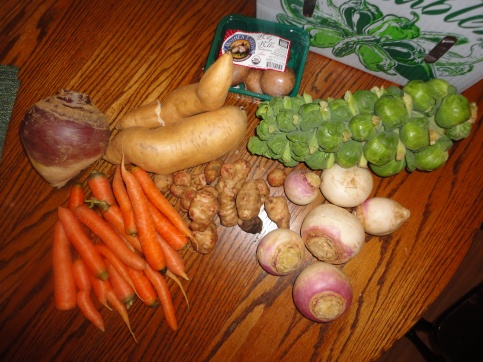 The most interesting part about purchasing a CSA farm share is you never know what you’re going to get. I mean, I know it’s winter and most likely I’ll get a ton of root vegetables, but WHAT KINDS of root vegetables will be in my box? Last week the surprise item was Jerusalem artichokes. I’ve never seen them, cooked them, or tasted them.

Despite their misleading name, Jerusalem artichokes are part of the sunflower family and sometimes called sunchokes or sun roots. I don’t think they taste like artichokes at all, but French explorer Samuel de Champlain did. So that’s what he called them when he brought them back to Europe from the New World. Mr. de Champlain found them in a Native American garden in Cape Cod, Massachusetts where they became a diet staple of the Pilgrims settling in Plymouth (my former hometown).

After a little internet research, I discovered that Jerusalem artichokes are high in protein, low in starch and just like other root vegatables–good for mashing, roasting, or throwing in soups–but they also saute well and taste great raw. A versatile little tuber!

Using the mushrooms from my CSA box and a couple of sausages, I channeled the Pilgrims and made an easy one pot meal perfect for cold weather.

Winter One Pot Meal with Sausages and Jerusalem Artichokes

4 sausages – any kind (I used Italian-style chicken sausages, because that’s what I had on hand from the farmers market. Skip the sausage if you’re a veggie)

10 Jerusalem artichokes, scrubbed (they are VERY dirty, so scrub them well!) and sliced into 1/4 inch pieces

zest of one lemon

Brown the sausages all over in 1 tablespoon of olive oil in a deep skillet. Set aside. Add the onions to the skillet, adding more olive oil if necessary. Let the onions soften over medium heat, until they are VERY tender and melting. I let them hang out in the pan for about 20 minutes while I prepped the rest of the ingredients. 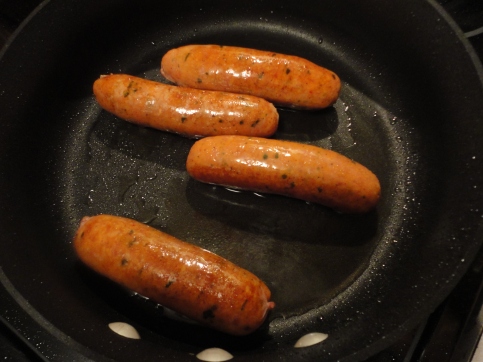 Get some color on those sunchokes

Add the lemon zest, kosher salt, and pepper. Give everything a good stir. Add the sausages back into the pan, along with the thyme sprigs. Pour enough water in the skillet to just cover the veggies. Bring to a boil. Cover and turn the heat to low. Simmer for about 25 minutes, or until the Jerusalem artichokes are tender. If there’s too much liquid in the skillet, uncover, turn the heat up and allow to simmer and reduce. The broth is so flavorful and rich because of those melting onions and yummy mushrooms.

Ready for their water bath

What’s your favorite winter vegetable? And can someone PLEASE tell me what to do with a very large rutabaga?!?