I visited John the other day. A visit was way overdue for two reasons. The first because the kitchen scraps I save for his compost pile were attracting flies and other vermin. The second because too much time had passed since my last visit. I was having withdrawals–the shakes and everything. John and Kathy were out in the yard when I walked up the driveway, weighted down by two buckets of smelly food waste. After John dumped what he considers smelly, nutritious goodness into the pile, he took me on a tour of the garden.

So many things happen in a garden over the course of two weeks! Astonishing!

The zucchini looked like a miniature rain forest, the corn was coming up, and the blueberry bushes I helped plant were bearing fruit! I am such a gardenerd (thanks to my friend Nicole for that moniker).

I’m embarrassed to say I didn’t know how zucchini grew, so I was amazed when I saw those large jungle-like leaves and green squash emerging from a pretty yellow flower. John showed me how to twist the zucchini gently to harvest it. 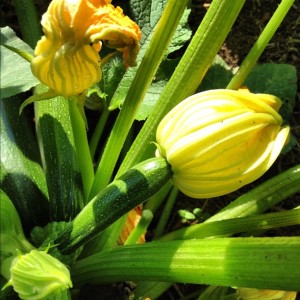 Walking the perimeter of the garden, I noticed the peppers getting taller. I only watered them two Saturdays ago with John’s special and nutritious seaweed water. I’d like to take some credit for their growth. We made our way over to the row of blueberry bushes. John showed me the half pint of blueberries already picked; they were sweet and plump. The nets he threw over them to prevent the birds from enjoying their juicy goodness were working.

Speaking of birds, remember the lovely blue eggs in the blue bird house? 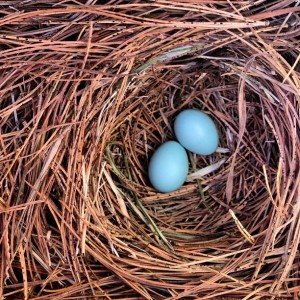 Well, after two tries, the blue bird couple was able to keep some eggs from the sparrows (the sparrows invaded regularly to toss the eggs onto the ground). And they hatched! John lifted the lid of the bird house while I climbed up to take a closer look. Huddled together in a mass of beaks and fluffy black down were at least three baby birds.

After John piled cucumbers, zucchini, beets, and a variety of seeds into a bag for me, he changed into his sneakers, pulled on his knee pads, and jumped into his little red Miata headed for a volleyball game. He has stores and stores of energy! I chatted with Kathy for a while and then drove the two miles home feeling refreshed and ready to roast some veggies. I really need to visit John and his backyard more often. (John, I promise to come help you weed very soon.)