Many of you don’t know this about me but I am both a pastor’s wife and a pastor’s daughter (double whammy!). Church, in various forms, has been a part of my life since the dawn of my time here on earth. Currently, I’m part of Eastpoint Community Church which not only serves those that walk through the doors each Sunday, but also reaches out to the nearby community and to the desperately poor around the world. We take our social justice projects seriously.   That’s why I signed up to be a blogger for the poor with Living Bread Ministries. Through this nonprofit, my church supports an entire church plant in Capao da Canoa, Brazil, which concentrates their efforts on urban slums.  Today, I’m dedicating this post to Igreja Batista Viva, our sister church.
***

When I email-interviewed Barbara Hubbard, Living Bread’s Director of Administration, the questions took a food-related turn–very fitting since this is a food blog.  As a Brazilian native, Barbara has great insight and knowledge regarding the food culture in Brazil.

What is the diet like in the areas Living Bread serves?

Living Bread his currently working in the southernmost state of Rio Grande do Sul, Brazil. The south of Brazil is known as “cattle country” and largely agricultural, so naturally the basis of the diet is beef, rice and beans. However, southern Brazil has a large number of Italian and German immigrants (among others), dating from as far back as 1870 and 1818 respectively; therefore breads, pasta and pork also play a big role in southern gastronomy. 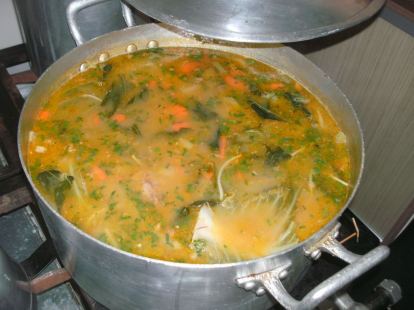 Soup served at a local church 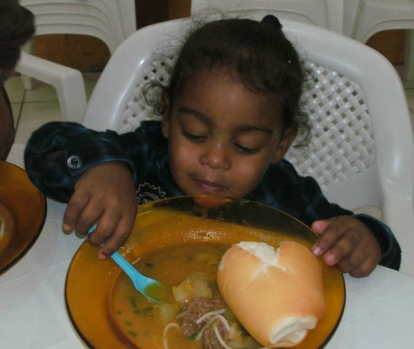 A cutie-pie enjoying the soup

What is the “national dish” of Brazil?

Brazil doesn’t really have a “national dish,” but the one common denominator on tables across the country would be black beans, rice and some form of beef. From a culinary stand point, Brazil was heavily influenced by its indigenous people, the European immigrants, and the African slaves who were brought there, and each region has a very distinct cuisine. In the south of Brazil, where we are currently working, the “local dish” is the churrasco {chuh-ras-koh} (although variations of it are enjoyed throughout the country), which consists of large cuts of beef cooked over open fire on a very large skewer. Churrasco is served with an array of side dishes, most commonly potato salad, green salad, boiled or fried manioc, manioc flour and bread. Churrascarias are becoming popular in the US, otherwise known as Brazilian Steakhouses. (See Fogo de Chão, Sirlae’s and Texas de Brazil.)

Do children/families struggle to eat each day?

Although the Gaúcho (cowboy – nickname of those from Rio Grande do Sul) prides himself on the abundance and variety of foods available to them, those living in the communities in which our church plants are acting tell a much different story. Our church plants are located in the urban slums in and around the capital city of Porto Alegre. Many living in the slums came to the city looking for jobs and better opportunities. Not able to find employment and without money to return to the interior, they became squatters in the open areas of the city (very similar to the “tent cities” in the US during the Great Depression). These families (mostly single women with several children) survive by collecting garbage throughout the streets of the city. Many bring their several bags of trash home where they sort it into 3 piles: trash, food and recyclables (which can be sold for little money). It’s not uncommon to drive around in these communities and see kids of all ages (as well as adults) scavenging the trash for food.

Those who are able to purchase food, usually buy the basics (and cheapest food items) such as rice, pasta and bread. Fruits and vegetables are a rare luxury, with the possible exception of green leaf lettuce; they are not expensive but are considered items that “don’t fill the belly.”

In light of this growing problem and as part of our churches’ commitment to a comprehensive ministry, all of our church plants operate a food ministry where basic food kits and meals are distributed on a monthly basis. Many of our pastors are adamant about telling the church members, and others in the community, that he does not want to see them eating from the garbage. If they have a need, they can come to the church. 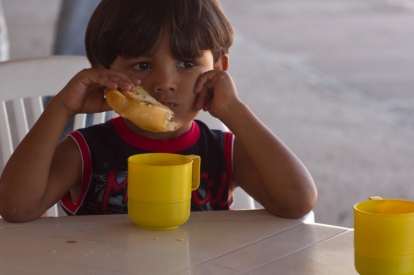 Visit livingbread.org to learn more about helping the desperately poor

When your family is struggling to find food, school supplies don’t seem that important.  However, without them kids who are already struggling have almost no chance at doing well in school.  Our churches have ongoing ministries to address the need for food, and through Share Christmas we are addressing the need for school supplies.

Each $15 donation gives a child a school supply and hygiene kit. If you’d like to donate, go to www.sharechristmas.org.