I’m a Netflix junkie. Nothing I like more than surfing the choices streaming through my husband’s Playstation 3. I’ve relived six seasons of The Office, discovered Parks and Recreation (Ron Swanson is my hero), cringed my way through a couple episodes of Hoarders, and guiltily enjoyed each episode of The Tudors (in quick succession). I also enjoy the occasional documentary. When I watch one I feel like my mindless TV viewing is purposeful and even academic. While common sense and the taste of a fresh-off-the-vine tomato changed my food perspective for good, food documentaries have been slowly working their magic on me too. Here’s a list of the ones that changed my food perspective in a big way, meaning after watching each one I changed something about the way I eat or think about food:

Food, Inc. – The very first food documentary I ever watched (unless you count the short film I saw at the Herr’s Potato Chip Factory during my stint as a kindergarten teacher), Food, Inc. is an eye-opening experience, to say the least. The way it explains the industrialization of our food sources (i.e., factory farming, GMOs, pesticides/chemicals in food production, antibiotics in animal feed, governmental policies relating to food, etc.) is necessary and struck fear in my heart (fear of E. Coli and fear for the health of Americans). After seeing this film, I vowed to only eat locally sourced poultry. I haven’t had Perdue since.

Dive – My older brother recommended this short and entertaining documentary to me. The film follows Jeremy Seifert and friends as they pilfer through dumpsters at well-known grocery stores in search of dinner. What do they find? Perfectly edible and NOT expired food thrown away due to company policies. Jeremy rescues filet mignon, dozens and dozens of eggs, and perfect pints of strawberries. He feeds this food to his family and stocks his freezers full. I learned that America throws away half of the food it produces. That’s insane! After seeing this documentary, I vowed to be less wasteful of the food in my own fridge. If it’s about to go bad, I cook it, eat it, or give it away. I also take my food waste over to John’s compost pile every now and then.

What’s On Your Plate? – Sadie and Safiyah, two 11 year olds from New York City, decide to find out where their food comes from after experiencing a peak-of-freshness tomato while on vacation (I know the feeling, Sadie and Safiyah).

Their journey leads to new discoveries, like where the apples in their school lunches come from (all the way from Washington State, not New York State; this doesn’t make sense to them) and how long it could take a school to receive a new, usable stove (five years!). This film cemented my committment to local eating and challenged me to look for all possible CSAs in my area in order to tell everyone to be a part of one! Chef Bryant Terry cooked up the bounty from Sadie and Safiyah’s CSA while teaching them the importance of shortening the food chain. Watch this one with your kids. Because Sadie and Safiyah are narrating, it’s interesting and easy to follow.

Forks over Knives – I cannot begin to explain to you how this film changed my food perspective. With data and facts, the documentary shows how eating meat and animal byproducts (like eggs and dairy) may be the cause of degenerative diseases like cancer and cardiovascular disease. Both long-term and short-term studies on individuals and entire cultures are discussed. One short-term study shows a Nazi-occupied Norway with no meat rations or food animals available. The result? Disease rates went down; no meat, no disease. When the war was over, these same rates spiked back up. Another eye-opener for me: a traditional Japanese diet contains little to no meat (it’s used more for flavoring than anything else). In Japan, breast and prostate cancer rates are almost nonexistent. Again, no meat, no disease.

Since seeing Forks over Knives, I have eaten red meat only once, try to eat vegetarian a few times a week, and never, NEVER eat anything with high fructose corn syrup. (I could go on and on about our government-subsidized corn supply and the resulting government-subsidized unhealthy diet, but I won’t. Just watch the movie and you’ll see what I mean.) I’m still on the fence about doing without eggs and dairy. I like them both too much. A life without cheese seems like a sad, sad existence. I can, however, do with less meat in my diet. I choose a fork over a knife, meaning I will eat a whole (unprocessed), plant-based diet so going under the surgeon’s knife is not a necessary future for me.

Fresh – Michael Pollan (a regular in food documentaries/discussions) explains what America’s farms are doing wrong: maintaining a mono-culture, meaning only one species per farm. Only cows on a cattle farm, only chickens on a chicken farm, only corn on countless farms in America’s heartland. A mono-culture is not seen in nature and breeds disease. A real working farm needs many different species working together to make a healthy whole (as seen on Joel Salatin’s farm). That’s why medium organic farms are more productive than larger one crop farms (about $2,850 per acre more productive). Here are other tidbits I learned: only three major companies control our food supply, 70% of the corn produced in America is fed to cattle, and since 1950 our produce has become 40% less nutritious. Awesome. But there is hope! I drew such inspiration from Will Allen of Growing Power, who thinks everyone should have access to fresh, nutritious food. He has a three-acre vertical farm right in the middle of Milwaukee, Wisconsin, and he trains others how to do the same, no matter where they live. 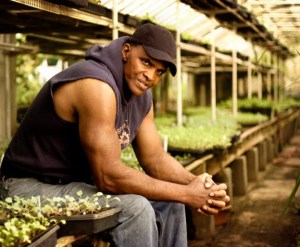 Will Allen – I love this guy!

This movie put a positive spin on the usually depressing facts about our food supply. The credits rolled while individuals told their own stories of change: starting gardens in front yards and visiting farmer’s markets instead of supermarkets. After viewing this movie I felt like we really can change the way our culture views food and food production, one bite at a time by buying locally, supporting farms near us, and making well-informed choices. I’m planting my own vertical tomato plants thanks to Fresh and Will Allen!

Food Fight – A lot of these documentaries deal with the same subject matter, but I always finish each one with a different takeaway. The takeaway here will take a few sentences to explain. Follow this progression with me: In 1971, Earl Butz (yes, pronounced just like it looks, Butz) becomes the Secretary of Agriculture under Nixon. During his leadership, small farmers are abandoned in favor of huge farms that produce cheap food in large quantities. These farms produce 16,000 calories per person per day. (Mainly in the form of corn and corn-derived products in an unsustainable way. We are losing soil faster than we can replace it.) Two generations later, obesity and food-related illness will give our children shorter life spans than their parents. This movie made me want to become a social activist and also caused me to examine politics and its relationship to food. I felt empowered to eat and shop local in order to create a change.

On a completely not-related-to-food note, Food Fight also made me completely jealous of this guy’s ability to grow a mustache. That is a sweet ‘stache!

Snapshot of David Lance Goines, writer and illustrator, and my mustache hero.

I may spend some time in later posts discussing the issues in these documentaries in more detail, but I’ve been so inspired by these six that I had to share. Next time you’re on the couch wishing for something interesting to watch, don’t just mindlessly watch another episode of House Hunters (spoiler alert: the closets will never be big enough for his clothes too; the backyard will always need a fence; and the kitchen island really is perfect for “entertaining”); check out one of these documentaries instead. And if you don’ t have Netflix, get on that! It’s the best.

{This post part of Fight Back Fridays on Food Renegade}