Two years ago when I started this blog and began researching local food options in my area, I was blessed to meet John. He lives down the road a little ways from my house. For a few blissful seasons, I helped him plant tomatoes, potatoes, asparagus, and strawberries and then harvest those beauties plus many others. His backyard is the equivalent of a small farm–he even has chickens! I’m pleased to say that he is open for business this year after a brief hiatus. Just follow the signs you see on Old County Road in Newark. Here’s a piece I wrote about John a couple years ago. He’s still an inspiration!

When I pulled into John’s driveway he was standing by his shed with bare feet. I’ve talked about John before, mainly about how a cherry tomato from his garden inspired me to eat locally. I told him this. He looked pleased. “Oh really?” he said. “It was that good?”

John was kind enough to take a break from potato and asparagus planting to show me around his garden. He has two generously sized plots. Part of one was tilled with potatoes, carrots, broccoli and snap peas already planted; the other parts still bright green with crop cover, waiting to be planted later this spring. 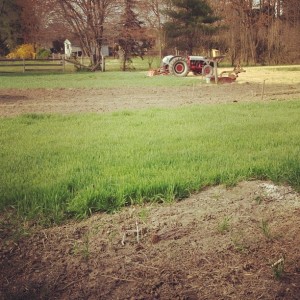 Part of John’s garden. Notice the beautiful green of the crop cover.

When I asked John how long he’s been gardening, he said, “Well, I guess since we bought the house in 1975. Yes, that was ’75,” he said with a grin. The soil was in rough shape when he arrived, and he’s put a lot of work into making it suitable for growing things. When I stuck my feet into the soil, it felt soft and rich, perfect for little roots to grow. 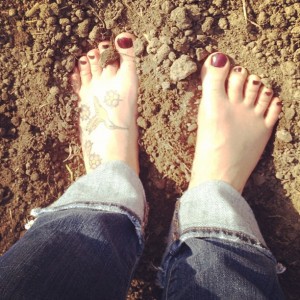 My flat and square “Fred Flinstone” feet getting happy in the lovely soil of John’s garden.

John and I sat at the picnic table near his deck and surveyed the back yard. He pointed out the leaves he bags throughout the year to add to the soil, the nutrient-adding crop cover, and his wife’s flower beds. From my point of view, that one back yard looked like a full-time job. “Is it worth it?” I asked. “Well…I’ve been doing it for so long. The hardest part is maintaining the produce stand out front. I have to be here to make change.” One reason it’s worth the effort are the donations he makes to the Food Bank of Delaware. I talked to Jim Weir, the Operations Director of the Newark branch. Jim knew John right away, saying John makes a donation every single week, which adds up to over 2,000 pounds of fresh produce each growing season–all donated to those that need it most. Worth it, indeed.

John showed me his asparagus plants, being careful to remind me that asparagus takes a while. “There won’t be any at the stand this year, but maybe next year,” he said. I’ve never seen asparagus plants before; they didn’t look impressive. John wanted me to know that he’s only growing the asparagus for his wife. “I don’t care for it,” he said. “Or for those little cabbage things.” I assured him that both asparagus and brussel sprouts (the little cabbage things) are excellent when roasted in the oven. He didn’t believe me. 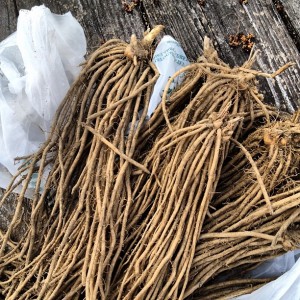 Walking a circle around his backyard, John and I ended up at the compost heap. I told him I always hate to throw away my coffee grounds, egg shells and potato peels, but without a garden I don’t have much use for a compost bin. We struck a deal, and now I’m saving my scraps for his compost. I’m excited to contribute, even in this little way! 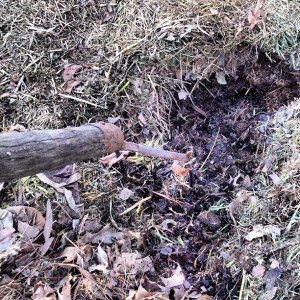 In an effort to contribute even more, I offered to help him with the planting anytime. “How about right now?” Before I knew it, John put a hoe in my hand, and I was covering seed potatoes with the dark, rich soil. 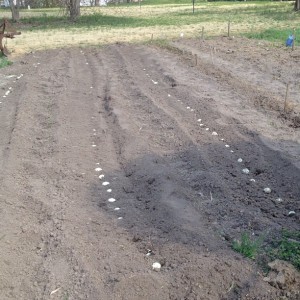 Neat rows of potatoes, ready to be covered 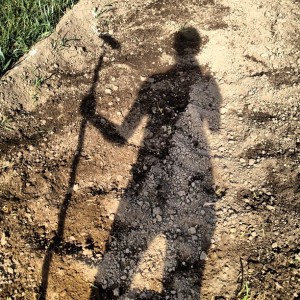 After the potatoes were covered, John showed me the strawberry plants. He’s planting 75 new plants this year, right next to the asparagus plot. 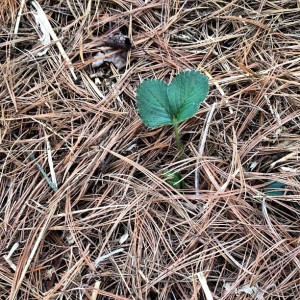 The blueberry bushes are growing too. He’s hoping to pick more than a handful this year! 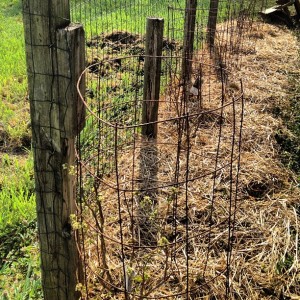 One of six blueberry bushes

As we were looking at the strawberry plants, I noticed a large metal contraption near a tree. John picked it up. “This is for making deep wells, furrows we call them, in the soil. That’s where I’ll plant the asparagus.” 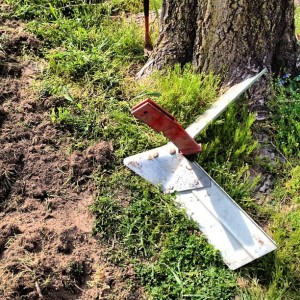 A Furrow Maker (that’s my technical name for it)

John showed me the soil on this plot. Although not as good as the plot where the potatoes are planted, “this soil is coming along.” 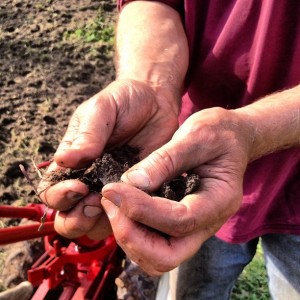 John said the dirt is less clay-like and clumpy than before, but it required a lot of work! 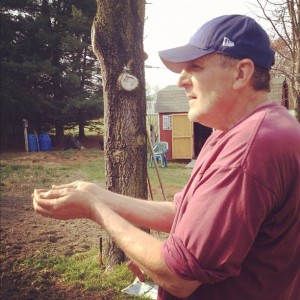 John, talking about his soil

I wanted to stay and help John with those furrows, but I had to go. As we were walking to the driveway, a neighbor shouted over, “Do you have an apprentice over there, John?” John waved, nodded and said, “She’s a good learner, and I’ve got to teach someone how to do this so I can retire.” I’m an eager learner, at least.

Before I left, John ran into the house to get me an unexpected gift–homemade black raspberry jelly. I spied his gardening shoes, covered with dust, and looking picturesque on the wooden steps. 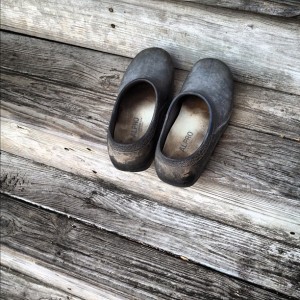 Who needs shoes when one can go barefoot?

So tell me, who’s inspired you to get out of your comfort zone, start a garden or even do something daring?