“May the odds be ever in your favor!” It took more than luck to win the Hunger Games. Katniss Everdeen proves that living off the land and eating locally has some life-giving advantages, and I intend to build a case for local eating based on Katniss’ well-played game.

But first some back story for those of you who have not seen TV, looked at the internet, or read a magazine since 2008:  The Hunger Games is a wildly successful young adult novel with an equally successful movie just released. In a post-apocalyptic America, the Capitol  forces each of its 12 districts to give up one boy and one girl as a tribute in a fight to the death called The Hunger Games.  These games are televised live, and reinforce the Capitol’s power and the districts’ fragility. Katniss Everdeen, our heroine, volunteers for District 12 after her sister’s name is chosen in the lottery. There are many details of course, but that’s the basic premise.

Okay, the foundation has been lain, and the spoiler alert given. Here are six solid reasons Katniss Everdeen makes a case for local eating:

1. Going to the local market is a great way to make friends and score confidence-building mementos like a mockingjay pin. The book and the movie vary on this point. In the book, Katniss acquires the pin from Madge, the mayor’s daughter, but the movie shows Katniss in the local market trading with a vendor. She spies a gold mockingjay pin and her vendor friend gives it to her free of charge. Meaningful memento acquired and confidence boosted! I know I don’t usually get freebies from market vendors unless I show up every week.

2. Eating local meat makes you stronger and healthier, especially when battling for your life in The Hunger Games arena.  Not only does Katniss hunt squirrel and rabbit to trade for necessities, but she also gets to eat some of that protein, making her stronger at the start of the games. Not to mention the benefits of running around in the woods with Gale, which undoubtedly builds muscle tone and endurance. I know that when I eat local, grass-fed beef I feel better and stronger (and I’m confident that there’s no hormones or pink slime added).

3. Making do with what local food you have on hand makes you very resourceful and kind of fearless. Case in point: what resources did Katniss have while trapped in the tree by the Careers who were waiting to kill her? She had a tracker jacker’s nest, and that’s pretty much it. Oh, and a knife, which came in handy when sawing the limb that released the nest and secured her freedom. Katniss is resourceful! Reminds me of my own resourcefulness when the only local ingredients I have on hand are two sausages, some carrots, and a few turnips. No problem! I will, to coin a phrase, “tracker jacker” the crap outta that and make a delicious meal for me and the husband.

4.  Having to raise, grow, or kill your own food sets your priorities in order. For example, in the Capitol, they don’t eat locally. All of their food is shipped in from the Districts on train cars. No one thinks about where the food comes from, and from the looks of it, residents of the Capitol barely work  for their food. Therefore, their priorities consist of dyeing their hair ridiculous colors, wearing couture fashions, and generally being consumers. On the other hand, Katniss cares about her family and wants to feed her mother and sister the best food she can find. 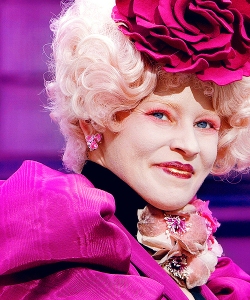 5. Foraging for medicinal herbs and other edible plants enables you to recognize poison berries.  Katniss outwits the Game Makers by recognizing Nightlock, a poisonous berry, and using it to her advantage. When forced to choose between no victor or two victors, the Game Makers relent. Katniss saves herself and Peeta while starting a revolution among the districts. It makes me want to create my own edible landscape by planting blueberry bushes in my front yard.

6. Hunting for your own food means you are excellent with a bow and arrow. Hence, you have survival skills. Katniss survives the games by being able to hit very small targets. First, it was the apple in the pig’s mouth at the training exhibition (she scores an 11 out of 12 for that one). Next came the bag of apples at the Careers’ booby-trapped food supply. By targeting those apples and blowing up the food supply, Katniss changed the course of the game.  Finally, Katniss shoots an arrow through Cato’s hand, freeing Peeta and delivering Cato to the dogs. Survival skillz (yeah, with a z). Reminds me of the time I went to Linvilla Orchards and got lost in the endless rows looking for honey crisp apples, and yet I survived. I didn’t even have a map.